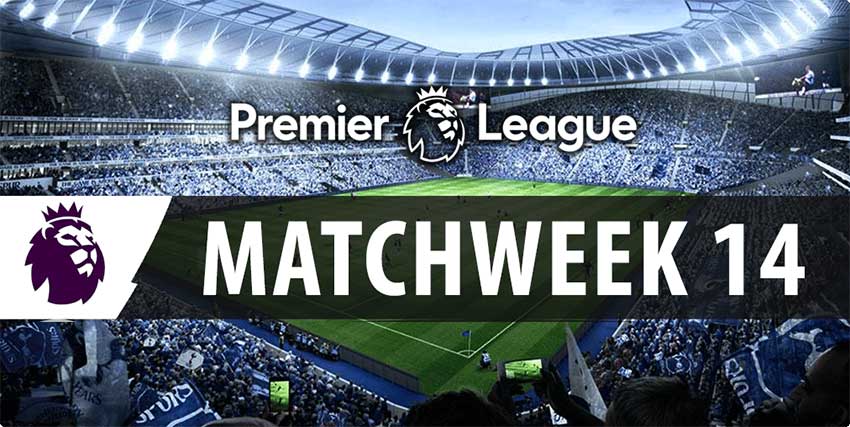 THINGS are getting tight at the top of the Premier League tree.

League leaders Chelsea keep winning. The only problem is, the rest of the top four will not let up.

There is just three points that separates the Blues from the fourth placed Gunners, but that is where the tight points tally ends given the Spurs are already four points adrift of the Champions League zone.

This week we see first and third locking horns in what promises to be the match of the season, while Arsenal and Liverpool face away trips which could define how realistic their title aspirations are this season.

Punters last week got a tasty $3.40 return on our Premier League multi last weekend and this time around we have got one we deem to be just as safe at even better odds.

All odds for the 14th week of the English Premier League season were provided by Sportsbet.com.au, who is offering punters a fantastic opportunity for those who are yet to sign up at the company.

Selections for the EPL Week 14 multi:

Liverpool to win against Bournemouth ($1.67)

Two teams in dire need of a win for very different reasons do battle at the Lane on Sunday morning as the Spurs host the Swans.

The Spurs are fifth on the Premier League table, four points adrift of North London rivals Arsenal. If they are to bridge the gap on the top-four these are games they need to be winning.

Swansea is struggling this season. For a team that has been shown true grit throughout their Premier League tenure, nine points from 13 games simply is not good enough.

The Swans are second from the bottom and need to start winning if they are to maintain their Premier League status.
Key duo Danny Rose and Toby Alderweireld are in line to return for the Spurs after serving a suspension and recovering from an injury respectively.

Alderweireld’s stability in the defensive third in particular will be a welcome inclusion for a side that has failed to keep a clean sheet for the entire month of November.

Since regaining their Premier League status in 2011 Swansea has not defeated Tottenham in England’s top flight, and we are not expecting that to change on Sunday morning.

The Spurs should get our multi off to the perfect start.

Since gaining promotion this year Burnley has more than held their own in England’s top flight.

The Clarets have drawn against Manchester United while beaten Everton and Crystal Palace over the last month of football.

After a shaky start to the season, Stoke is one of the hottest teams in the league.

Only three other teams in the league (Chelsea, Liverpool and Arsenal) have recorded more points than Stoke in their last eight matches, and despite losing in game week 12 to Bournemouth the Potters have lost just once at home since game week four.

We are backing Stoke to maintain their dynamic run of form. They should be too strong for Burnley at home who have won just one game against the Potters in their last seven meetings.

It is an all London affair for the third leg of our Premier League multi as West Ham host Arsenal at the Olympic Stadium in the England capital.

After a brilliant 2015/16 campaign West Ham has failed to live up to the hype.

The Hammers have just one win from their last month of football and currently sit just one point outside the relegation zone.

Arsenal is in cruise control. Long-running jokes about their fourth placed finishes aside, the Gunners are in prime position to compete for the Premier League title given they are just three points adrift of league leaders Chelsea.

We see this as the easiest Premier League fixture to predict this weekend. The Gunners should win this one comfortably.

Final game of the Premier League multi this week sees the high flying Liverpool traveling to the English coast to face Bournemouth.

The Reds are in a tricky position. While Jurgen Klopp’s men sit in second and seemingly en route to at least maintaining a top-four finish they have a host of injuries to contend, including a newly acquired foot aliment to superstar midfielder Philippe Coutinho.

After a promising start to the season Bournemouth is in a hole. The Cherries have registered just four points from their last six games.

Liverpool has not lost to Bournemouth in any competition in a run that extends back 89 years, and we not expecting that to change on Monday morning.

Liverpool should record its 33rd point of this season to keep the pressure on the top two and round out our multi in style.

We are right back in the thick of the action this weekend given all the big competitions are up and running, which makes it perfect for those of us who want to piece together a mammoth multi.

However, the agony of losing out by one leg can be too much to bear for some of us, which makes punters’ blood boil.

For those who are sick of going down by one leg never fear, the betting agencies have answered our prayers and provided punters some peace of mind heading into the weekend.

Place a bet on the correct score market on the top of the table clash between first placed Chelsea and third placed Manchester City and if your team wins but you do not nail the score you will get your cash back up to $50.