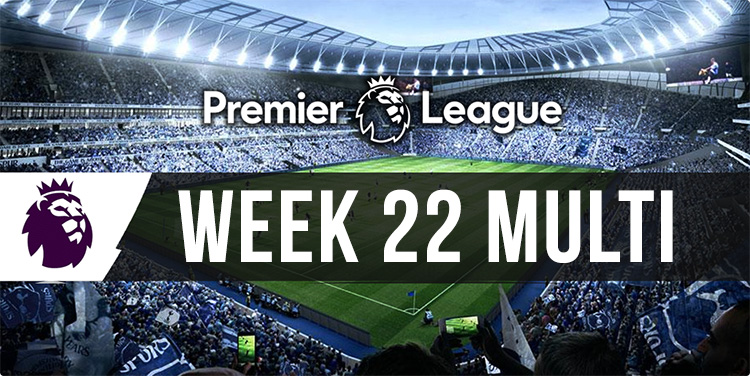 WE are entering the most important part of the English Premier League season in terms of the title, but as far as the bookies are concerned, the race is over.

Chelsea is the overwhelming favourite across the board ($1.57 at Sportsbet.com.au is the best price you will get), Liverpool ($7.50 via WilliamHill.com.au) and Tottenham ($8.50 via Sportsbet.com.au) are the only two other teams in single figures for the title.

Unless teams can start bridging the gap on Chelsea and fast the title market might be suspended within the month.

We are looking to the 22nd weekend of Premier League action however, and we have put together a sensational multi which should give us back-to-back weekends of profit from England.

All odds for the 22nd week of the English Premier League season were provided by Sportsbet.com.au, which is offering punters a fantastic carrot for those yet to sign up.

Selections for the round 22 EPL multi of the week:

Manchester City to win against Tottenham ($2.10)

Southampton to win against Leicester ($1.83)

The Reds of Liverpool host the Swans from Wales in the first game of our English Premier League multi.

Liverpool earned a fantastic point away at Old Trafford last weekend. The Reds led for the majority of the game after an early penalty but Zlatan drew the home team level late to split the points.

The Swans were embarrassed last week by the Gunners, going down 4-0 on their home ground. Swansea continue to firm every week for relegation and currently sit on the third line of betting at the $1.36 quote via Sportsbet.com.au.

This one looks clear cut to us. Liverpool should win to keep their surge towards the top of the ladder on track.

The Potters are aiming to win three games in a row after dispatching Watford and Sunderland back-to-back. The Red Devils represent a great jump in class compared to those teams however.

Manchester United is in the midst of a 12 game unbeaten run in the Premier League. After a shaky start to the Jose Mourinho reign the red side of Manchester finally look to be on the same page.

Manchester United look to be a step above their opponents this week and they should breeze past them on Sunday morning.

This is undoubtedly the best game of the week. City against Spurs in a match that has serious title ramifications.

Both teams played in 4-0 matches but were on the opposite sides of the ledger after City were smashed by Everton and Spurs scorched the Baggies.

Manchester City is looking to continue a great run of form against Tottenham in the English Premier League. The Sky Blues have won five of the last six matches in the EPL.

We are backing City to get their season on track. Their record against the Spurs is too hard to ignore.

Last leg of our multi sees the soon to be dethroned champions Leicester traveling to the scenic English coastline to face Southampton.

Both teams are looking to bounce back after disappointing performances last week.

The Saints dropped all three points away to Burnley last week while the Foxes were hammered by a Costa-less Chelsea.

Leicester is looking to overturn an awful away record in the Premier League. The Foxes have not won on the road since April 2016.

We do not think they will get the win on the road in week 22 either. Southampton should secure the points and generate a winning multi for us.