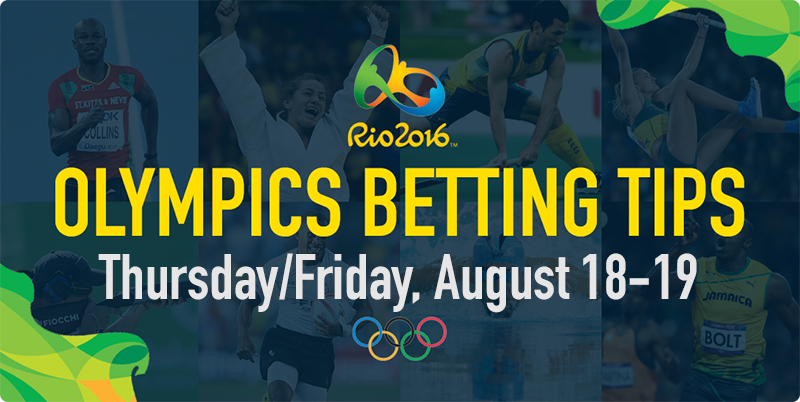 IT’S the pointy end of the Olympics and there are a number of gold medals on offer, including the athletics, canoe and hockey disciplines.

We’ve run the rule over all the action on Thursday night/Friday morning and picked out several legs that you can have a play around with in a multi.

NOTE: At times, these legs can cause issues, so if you have dramas, sub one out and add another.

The Germans are tightening favourites in this discipline and that is because they have both pace and stamina, which is needed in an event like this. They’ll need to be quick over the 1000m and hold their pace throughout. But we reckon they can get the job done as favourites.

A two-time world champion, De Jonge is a national hero in his native Canada. The wraps on him are enormous this Olympics, after he secured bronze in London four years ago. The $3 quote looks over the odds for the in form machine.

Gunning for gold medal number two in the event, Alistair Brownlee is the one to beat in the men’s triathlon. A star in all three disciplines, Brownlee should have the tickets to hold off a crack field in the event and salute for Great Britain, becoming the first man to win more than one gold medal in the event at the Olympics.

The reigning World Cup 10m gold medallist, Ren Qian is the teenage prodigy ready to take the diving world by storm. Possessing rare skill and grace, Qian is the hot favourite to claim the gold medal on the platform and we agree that it is hers to lose.

The Aussies are gone and Holland and Germany are playing off for bronze. That leaves a pair of unusual suspects to battle it out for Olympic hockey gold in Rio. Belgium has been the surprise packet of the tournament, playing with pace and skill to outwork and outmatch a host of more fancied opponents. After years of promise, the so-called golden generation of Belgium hockey looks set to finally deliver on its potential.

There’s not much that hasn’t been said about the lightning Bolt at these games, but here he looks set to write yet another chapter in his brilliant story. The greatest pure sprinter of all time, it doesn’t really matter who else is in the field. He looks set to unite his trio of 100m gold medals with a trio of 200m gongs.