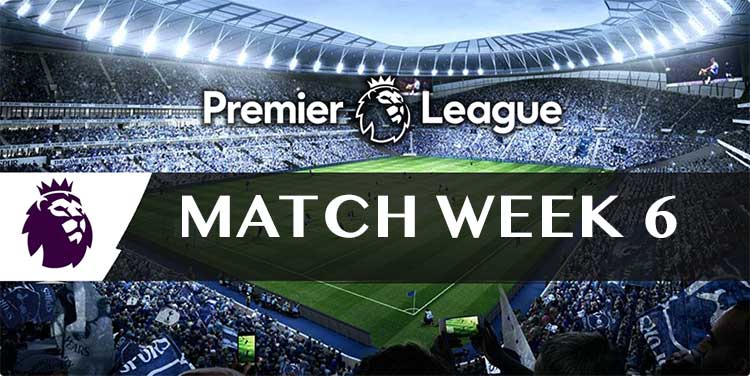 WE are only six weeks into the Premier League season and the competition is wondering – who can stop Manchester City?

Pep Guardiola’s men are two points clear of second-placed Everton at the top of the table, but we’re not reading too much into the Toffee’s form given they are yet to play any real teams this campaign.

The $1.62 on offer for City to win the title already looks overs at Sportsbet.com.au, and given Sergio Aguero is still to come back into the side, we are expecting that price to shorten even further in the coming weeks.

We are not worried about the title here though, as we have a multi to put together, and this week’s is an absolute cracker given the price we have found on some white-hot favourites.

All odds for the sixth week of the Premier League season were provided by Sportsbet.com.au.

Manchester City to win against Swansea ($1.40)

Sunday, 25 September from 12am at Anfield, Liverpool

First match of the multi this week sees the newly promoted Hull travelling to England’s north to face Liverpool at Anfield.

After a terrific start to the season Hull slipped badly last week at home to Arsenal, letting through four goals.

The Reds are flying at the moment, and after beating Chelsea away from home last week manager Jurgen Klopp has called upon his team and fans to display an ‘angry Anfield’ so they do not drop precious points against a team they should overcome.

“We have to be angry against Hull because they want our points – that makes me angry, so it’s easy for me,” Klopp said.

The call to arms from the manager is enough to get us excited that Liverpool will not take Hull lightly and we are backing them in to salute to get our multi off on the right foot.

Sunday, 25 September from 12am at Riverside Stadium, Middlesbrough

Second game of our multi sees the Spurs of Tottenham taking on Middlesbrough in match the visitors should be winning if they want to be considered a title threat this season.

The ‘Brough have not win since their game week two triumph over Sunderland and have failed to register a point in their last two outings.

Tottenham are aiming for a hat trick of wins after hammering Stoke and narrowly defeating Sunderland.

The Spurs will have to contend this week without star striker Harry Kane who will miss at least a fortnight citing an ankle injury, but the men in white should have no issues winning this one.

Sunday, 25th September from 12am at Liberty Stadium, Swansea, Wales

The powerhouse title favourite Manchester City look to keep their perfect start to the season in tact as they travel to Wales to face the Swansea Swans.

The Sky Blues are in scintillating form and have not even looked like dropping a point in their opening month of football, culminating in a 4-0 hammering of Bournemouth after winning the Manchester Derby.

Swansea have had an indifferent start to campaign, displaying terrific form in their 2-2 draw against Chelsea, while losing to the previously winless Southampton last week.

Swansea can be a tricky opponent but we think City should not have any problems keeping their winning streak alive.

Sunday, 25 September from 2.30am at Stamford Bridge, London

A battle of the rich London clubs rounds out our multi this week as the Gunners and the Blues clash at Stamford Bridge.

Both teams are locked on 10 points each and will be able to enter the top four clear of their Sunday morning opponent.

Arsenal bring wonderful form into the contest after hammering Hull 4-1 away from home.

The win was the Gunners’ third straight victory.

After winning their opening three games of the campaign Chelsea have hit a stumbling block. The Blues drew alongside Swansea before losing at home to Liverpool last weekend.

Nothing short of a win will do for either side.

We are favouring Arsenal here – winning form is good form and Chelsea look to be slowing down after a red-hot start.

Sportsbet.com.au’s fantastic multi insurance deal continues into the sixth week of Premier League action, so punters again will be able to have a crack at our multi with some peace of mind.

Looking to place a correct score bet on this weekend’s Manchester United vs. Leicester match up? Sportsbet has the deal for you.

Place a correct bet on Saturday night’s match between the Red Devils and the Foxes and if your selection wins but not by the margin you predicted you get your stake back up to $50.

Looking to invest in the head-to-head market? WilliamHill.com.au have identified two matches this weekend that can get you cash back if you are incorrect.

Back a team in either the Manchester United vs. Leicester and/or Arsenal vs. Chelsea matches and if your side is winning at the 80th minute mark but goes on to lose – Money back up to $25