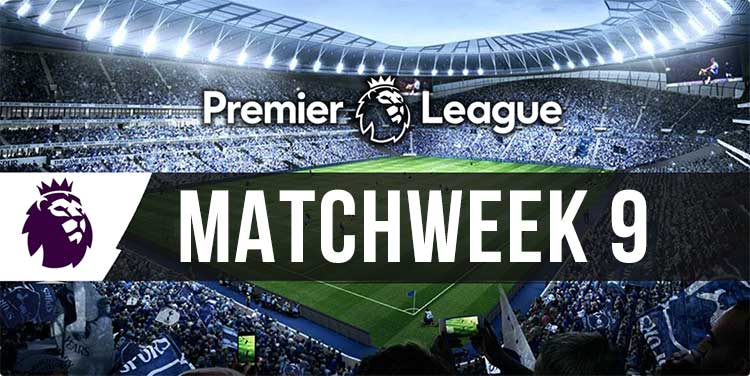 AFTER a six-week stretch where it looked like engravers had already begun to etch Manchester City’s name onto the Premier League trophy, suddenly the title race is wide open.

The Sky Blues were held to a 1-1 draw against Everton after the league leaders had two penalties saved, meaning their closest rivals were able to bridge the gap.

Despite dropping points in their last two matches, City remains the $2.10 favourite for the title at WilliamHill.com.au.

Arsenal and Liverpool ($5.50) are both locked on the second line of betting at Sportsbet.com.au, and are the only sides outside of City who are in single figures for this year’s title.

All three have winnable matches this weekend, but a loss for any of the three sides could see their odds blow out dramatically.

It should be a fascinating weekend of action.

All odds for the ninth week of the Premier League season are provided by Sportsbet.com.au.

Selections for the week 9 EPL multi:

Manchester City to win against Southampton ($1.53)

An in-form Arsenal kick off the ninth weekend of Premier League action against strugglers Middlesbrough in the English capital.

The Gunners are locked on 19 points alongside league leaders Manchester City and have been the most impressive team of the campaign after their opening weekend blemish against Liverpool.

A win on the weekend would extend their win streak to seven straight games and eight matches without a loss.

After starting the season drawing alongside Stoke and defeating Sunderland, Middlesbrough have been ice-cold, registering just two points from the next six games.

Despite their poor period the Boro sit outside the relegation zone and are on the fifth line of relegation betting at Sportsbet.com.au at the $2.88 quote.

Heading to the Emirates to face the Gunners is perennially an onerous task, but given Arsenal’s current form it is hard to see any potential scenario where Middlesbrough take a point away from London.

Arsenal will win to start us off on the right foot.

Kicking off concurrently alongside the Arsenal game, West Ham host Sunderland on the other side of London.

The Hammers have had an ordinary start to the season, but a 1-0 away win against an in-form Crystal Palace could be the catalyst they need to get their season on track.

The win was West Ham’s second victory of the season.

Sunderland were expected to struggle to survive this season, but no one would have predicted the Black Cats would have just two points to their names after two months of football.

The poor start to the season has the Black Cats anchored to the bottom of the ladder at the $1.53 second favourite to get relegated at Sportsbet.com.au.

West Ham has won just once at London Stadium since making the jump from Upton Park, but Sunderland presents the perfect opportunity to get their second win since taking up their residency Olympic Stadium.

The Hammers should make it two wins in a row for the first time this season.

The third leg of our multi this weekend sees the Reds of Liverpool hosting the Baggies of West Brom in a match that could get ugly for the visitors.

Liverpool has been dominant this season. The Reds have just one loss to their name across the first two months of the season in a run that has seen them beat two of last year’s top four as well as the previous year’s champions.

The Reds are legitimate title contenders this season.

West Brom’s form over the last month has been serviceable without being brilliant. The Baggies are undefeated but only have six points to their name to show for it.

We are expecting the Baggies’ month-long undefeated streak to come to an end. The Reds attacking prowess will be too powerful for the visitors who have kept just one clean sheet in the last five weeks.

The league leading City host the eight placed Southampton to round out our multi this weekend.

It seems ludicrous to say that the top of the table Sky Blues are in dire need of a win but after losing to the Spurs and drawing alongside Everton in consecutive weeks Pep Guardiola could use a win.

Unfortunately for Manchester City their opponents Southampton will be no easy-beats.

After a winless opening month of football the Saints have gone on to win three of their next four to surge into the top half of the table. The most pleasing thing for the Southampton fans is the fact that the team has conceded just one goal in the last month.

That will change this weekend however, given how potent City’s offense is.

Southampton will offer a stern challenge, but City are returning to pick fitness and should be too strong against the Saints on Sunday.

There is plenty of football action across the world this weekend which means the betting companies will need to bring their A-game to the table if they want punters shelling out their hard earned cash through them.

Crownbet.com.au is running a multi insurance promotion this weekend which encompasses all the big soccer leagues around the world.

Looking towards the head-to-head market this weekend in the Premier League? Head over to WilliamHill.com.au.