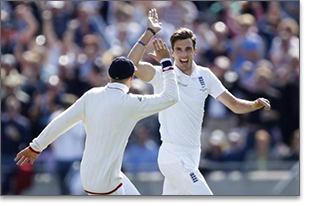 Where: Trent Bridge, West Bridgford, Nottinghamshire, England
When: Thursday, August 6
Bet with: www.Sportsbet.com.au – cash in on the huge free bonuses!

THE unpredictability of the 2015 Ashes series continues.

This time it was England’s turn to defy the odds, with an annihilation of Australia in the third test at Edgbaston.

The home side took just three days to dispatch the Aussies, with the return of forgotten fast bowler Steven Finn the story of the test.

Finn, a man who just 12 months ago was dubbed ‘unselectable’ by the English Cricket Board ravaged the Aussie bowling attack, taking eight wickets across the test on his way to man-of-the-match honours.

The win was not without incident for the home side though; with England’s all-time leading wicket taker Jimmy Anderson potentially out for the remainder of the Ashes series with a side strain.

Anderson, who took six wickets in a blistering display of fast bowling in Australia’s first innings at Edgbaston was forced to leave the field in the second innings and did not return.

England are hopeful their spearhead can return for the fifth test at The Oval.

The home side will also be buoyed by the return to form of Ian Bell, who was able to score back-to-back half centuries to lead his side to victory.

What an erratic period it has been for the English cricket team.

Wonderful at Cardiff, lamentable at Lord’s and extraordinary at Edgbaston; the English cricket team has been a model of consistent inconsistency at test level with a flip-flopping record of win-loss that stretches across seven tests.

A continuation of this record would hand the home side a 3-2 victory over their arch rivals, but there is no telling what kind of pressure Alastair Cook’s men would be under if they were to drop the fourth test.

Anderson’s side strain – which will likely rule the English spearhead out for the rest of the series – will have a profound impact on the fortunes of the home side on Thursday.

Not only is he England’s best bowler – both contemporary and all-time – but he also possesses an ability to control the ball like few others in the world.

Compound this with his sparkling test record at Trent Bridge where the 33-year old has taken 53 of his 413 wickets in eight Tests at the venue at an average of 19.24 and you see why the loss of Anderson is a monumental moment in this series.

Fellow fast-bowler Stuart Broad believes it be a collective effort rather than a feat of individual brilliance that will help England cover for the loss of Anderson.

“In Jimmy’s absence it’s going to be up to all the other bowlers to step up,” Broad said.

The 29-year old Broad’s experience will be paramount to England’s chances, with leadership imperative while Anderson is unavailable.

“You don’t know what’s going to happen but hopefully I’ll take on that extra responsibility to ensure we’re not crying out for Jimmy over the next couple of days,”

After a test victory to remember at the home of cricket, the Australian team came crashing down to earth with a pathetic display at Edgbaston in the third test.

The Aussies were bowled out on the opening day of the match, with opener Chris Rogers top scoring for the visitors with 52.

The next highest score for the Australians was 16, with the amount of extras bowled by England (8) adding more runs to the overall total than five of Australia’s batsmen.

The loss places a lot of pressure on Michael Clarke – both as captain and as a batsman.

Clarke’s combined total of 13 runs is not good enough for a player of his calibre, and the Australian captain was frank when speaking about his woes with the bat.

“I think it’s always going to be hard to beat any opposition when they’ve got 11 and we’ve only 10.” Clarke said referring to his lack of impact thus far in the series.

“I certainly haven’t led from the front as I’d like to do as captain.”

Unfortunately for Clarke, Trent Bridge is one of the venues where his best cricket has eluded him.

In his two visits to Trent Bridge in the past, Clarke has only managed to score a total of 115 runs at an average of 28.75, well below his overall average of 49.73.

While the Australian captain should not be in any danger of getting dropped, it is almost certain that Adam Voges will make way, with Shaun Marsh being his likely replacement.

Selectors will be wary of the 32-year old Marsh’s failings at Australian test level, but the brother of incumbent Australian test all-rounder Mitch has ticked all the right boxes for the selectors.

Marsh has nails hundreds in the only two matches he has played so far over in England and looks ready to fulfil the promise that he has shown for years but never quite captured at the international level.

Taking a 2-1 lead into the fourth test at Trent Bridge would normally place England in a strong position to take the test out and secure the Ashes will one test to spare.

This will not be the case though, with a myriad of factors that play into the Aussie’s favour heading into Thursday’s match in Nottinghamshire.

First is the loss of Jimmy Anderson.

When the England attack was under fire for a lacklustre showing at Lord’s it was Anderson who stepped up in the first innings, eviscerating the Aussies in an impressive display of fast bowling.

Anderson’s ability to take wickets, especially at Trent Bridge is a huge blow to the home side too, with the 33-year old’s record at the venue unrivalled in world cricket.

Secondly, their oscillating test record which sees a loss following a win in their last seven tests.

The home side will be doing their best to downplay the significance of the win/loss sequence, but it has to play heavily on the minds of the players.

Australia is the number one ranked test side in the world for a reason: they know how to win, and when they lose they are keen to atone.

A big effort is required from Australian captain Michael Clarke.

Clarke is one of Australia’s all-time greatest batsmen, but his record this series has been abysmal.

The Australian captain might be struggling with the bat in England, but over the course of his career he has always found a way to extract the best out of himself when his country needs it the most.

The odds of him to score 50 or more runs at $2.75, even when his poor record at the venue is taken into account is a sound bet given the importance of the match to both Clarke the player and the captain.

Australia has only lost back-to-back tests once since the two teams last met in the 2013 Ashes series in England which displays just how dominant the Aussies have been in the test arena since.

The $2.20 on offer for Australia to level the series is one of the best bests of the series so far, with the loss of Anderson a huge blow to the home side and one that cannot be overstated.

Expect the Aussies to level the 2015 Ashes series at 2-2 and take the battle for the urn right down to the wire.