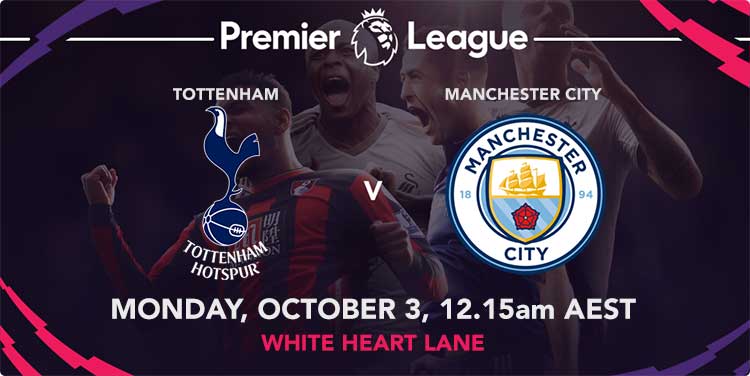 Monday, October 3 from 12.15am at White Heart Lane

THE AFL Grand Final will be over, the NRL Grand Final all done and, so it will be left to a blockbuster English Premier League clash between Tottenham Hotspur and Manchester City to get you through the early hours of Monday morning.

It is a mouth-watering clash between the Premier League’s top two teams, but disaster has struck at White Hart Lane, with the Spurs losing reigning EPL golden boot winner Harry Kane.

Luckily for Spurs, Heung-min Song is in red hot form, firing in a brace for Spurs in their 2-1 win over promoted team Middlesbrough on the weekend.

It was Son’s second brace of the season after he struck twice in a 4-0 win over Stoke City a couple of weeks ago and he, along with striker Vincent Janssen, will be charged with leading the line for Tottenham.

And they will need to keep it up, considering Kane – the Premier League’s top scorer last season – is expected to be out for at least a couple of weeks with an ankle injury.

There was a little good news on the Kane front midweek, with manager Mauricio Pochettino revealing scans showed his injury was not quite as bad as first thought (initial diagnosis had him set for two months on the sidelines).

“It’s much, much better than we expected. We are happy. It was very positive the scan so we’re very, very happy about this news,” Pochettino told reporters yesterday.

‘We still cannot give a time of how long it will take for him to recover.

“But be sure we’re happy because the scan was better than we expect.”

Son is leading the Spurs and his form stacks up, so, at $8, he is our best tip for the first goal, but if you’re looking for something tastier, a flyer on talented wing back Kyle Walker is worth it.

There have been no such injury dramas at City, with the Sky Blues cruising, despite the suspension of superstar Sergio Aguero.

They are superb without him, but they are absolutely devastating with him and he marked his return after a three match ban by scoring twice in a 3-1 win over Swansea City on the weekend.

Aguero fired in the opener for City before the Swans equalised. It was only a matter of time before City busted the game open and the deadlock was broken by Aguero who converted a 65th minute penalty and then Raheem Sterling put the result beyond doubt, 13 minutes from time. Bacary Sagna and Kevin De Bruyne were busy for the unbeaten City, now on a six match winning streak to start the season.

Aguero, remarkably, has 28 goals in his past 27 league appearances. That is why he is so short to score the first goal at $4.50 with WilliamHill.com.au but you still cannot ignore him. If you’re looking for juicier odds, then new boy Ilkay Gundogan could be a good bet at $13.

Both sides have superb form, with Pep Guardiola needing one more win to break the record for best winning start to a managerial career in the Premier League, but, interestingly, Spurs have had the wood over the Sky Blues in recent times.

Tottenham have beaten them in their last two encounters, after a streak of 11 games where they took all three points just twice.

And there are always tons of goals, with 22 in the past five meetings.

If Guardiola is going to break Carlo Ancelotti’s record, plenty will have to go right for City in enemy territory, but there’s a reason why they are favourite and there is a very good chance he will be smiling on Monday morning.

Both of these teams have started the season in ominous form, but some are saying the star-studded line-up Manchester City possesses has the real potential of going through the season undefeated and emulate Arsenal’s historic invincibles side. This will be the Sky Blues stiffest test yet, Tottenham, away from home, but you will be hard pressed to get better than even money about them in the win-draw-win markets this season, and those are odds we simply cannot resist. Spurs possess a resolute defence and star quality in the likes of Eriksen and Dembele, but we just feel that the weakened frontline could come back to haunt them against the staunch defensive battery of City. That being said, we think they still have a goal in them and they have the form to keep this close at home, but we’re tipping City to steal the three points with a very tight 2-1 win.