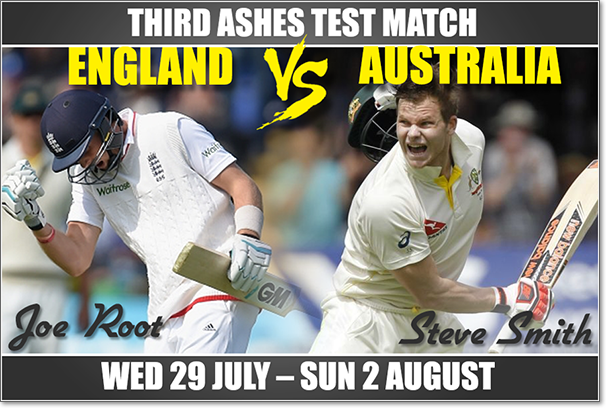 After a resounding victory in Cardiff, the English cricket team took an air of confidence into Lord’s that suggested the home side truly believed the Ashes were on their way back to the UK.

That confidence was quickly snuffed out by the Australians.

A double century to man-of-the-match Steve Smith completely derailed England’s hopes of taking momentum into the third test as the visitors cruised to a punishing 405-run victory.

English fast bowler Mark Wood believes he and his teammates did not deal with the weight of expectation as well as they should have.

“It’s definitely different. The whole intensity, pressure – you feel the nation on you a little bit.” Wood said.

“You’re desperate to do well for everyone and an Ashes Test is the biggest game you can have as an England player.

It doesn’t help when you get beat.”

The match was won on day one for Australia, with the wicket of Warner the only scalp the English were able to take as Chris Rogers and Steve Smith piled on the runs at will.

The Aussie bowlers also did not let their nation down, and with a fit and firing Mitchell Johnson – who took three vital second innings wickets in a venomous display of fast bowling – the visitor’s bowling stocks suddenly look much more threatening.

Australian coach Darren Lehmann believes Johnson has what it takes to be a major factor in the remaining three test matches.

“He’s got his mojo back and he’s exciting.” Lehmann said.

He’s an unbelievable athlete and a really important player. He copes with the pressure that (Ashes cricket) brings really well now,

“That’s important to him and us.”

What a contrast in fortunes between the first two tests for the England cricket team.

Unchanged and on top of the world after a huge victory at Cardiff, the home side were lamentable in the Lord’s test, leaving selectors no choice but to make changes to the side which lost by 405 runs.

Gary Ballance makes way after only managing to score 37 runs across two innings at Lord’s, and in comes forgotten man Jonny Bairstow, who has been rewarded for his stellar county cricket form for Yorkshire.

Bairstow’s form – where he averaged over 100 runs at first-class level this season – was too hard to ignore according to national selector James Whitaker.

“Ian Bell will move up the order to bat at three followed by Joe Root with Jonny Bairstow coming in at five.

“Jonny has worked extremely hard at his game and his record for Yorkshire speaks for itself. He fully deserves this opportunity.” Whitaker said.

The elongated break between tests, rather than the quick turnaround from Cardiff to Lord’s should also assist the England players in mentally preparing for the Edgbaston challenge.

Given the emphatic nature of Australia’s victory, it is hard to see Aussie coach Darren Lehmann making too many changes prior to the third test.

Chris Rodgers will take his place in the side after fears he may not see out the series after retiring ill in the second innings at Lord’s.

Rodgers trained strongly in the nets and is a certainty to play, but if he is deemed unfit to take to the field by the Australian medical staff Shaun Marsh is the next man in line after impressing with an unbeaten 101 against Derbyshire.

Brad Haddin returned to the squad after his family issue, but was in the field rather than behind the stumps for the Aussies’ tour match against Derbyshire.

While no confirmation has yet been made, it appears as if Neville will retain his place in the side after an impressive debut with the gloves.

Mitch Marsh’s strong showing with both the bat and the ball means Shane Watson remains out of the side, with competition for spots fierce in the Australian line up right now.

With the series square at one test apiece the pivotal third test between the two nations returns to one of the most ruckus and rowdy venues in England – Edgbaston.

After being overlooked for the 2013 Ashes series, Edgbaston will again host a pivotal Ashes clash, a venue that former England wicket keeper Alec Stewart says will give the home side a tremendous advantage in terms of crowd support.

“The crowd here makes such a big noise when you are doing well … It’s a unique environment.” Stewart said.

There is a mystery over just how the wicket will play, after a lifeless pitch ‘played into the hands’ of the Australians according to England head coach Trevor Bayliss.

This is after all the pre-series talk that the pitches were prepared at the behest of the England team to negate the impact of Australia’s fast bowlers – in particular Mitchell Johnson.

Now England captain Alastair Cook is now hoping for more ‘traditional’ English wickets for the remainder of the series.

The Australians will take immense confidence out of their Lord’s win and will be keen to keep the momentum rolling and will likely take an unchanged line up into Edgbaston.

The English have made a change to their batting line up, moving Ian Bell up the order and reinstating Jonny Bairstow, who has been excelling at county level.

England paceman Stuart Broad believes a change to the order is just the catalyst the home side need to regain the ascendancy in the series.

“I think when we get to Edgbaston you’ll see a very determined, steely, skillful batting line-up for England,” Broad said.

“I think it’ll be a big change from Lord’s.”

Much will come down to the spinners in this series, with Edgbaston traditionally very kind to the slower bowlers in the fourth innings.

Both Moeen Ali and Nathan Lyon have been prolific this series, but they will need to be at the top of their game if their respective sides are going to take 20 wickets to win this test.

England will be wary of the second innings form of David Warner.

After an opening test he would like to forget the destructive opener was picking off boundaries at will.

If Warner is able to build on that form established in the second innings at Lord’s the Australian batting line up suddenly looks much more threatening.

Momentum is a funny thing in cricket, invariably the side who gets into a winning groove is able to sustain it, but with the series locked at 1-1 it is hard to predict exactly how this test will play out.

Winning form is the best indicator for the Australians over the last two years.

After their 5-0 Ashes victory on home soil they have gone on to become the best and most feared test nation in the world for a reason.

Expect the Aussies to keep the momentum going and take a 2-1 lead going into the fourth test at Trent Bridge.