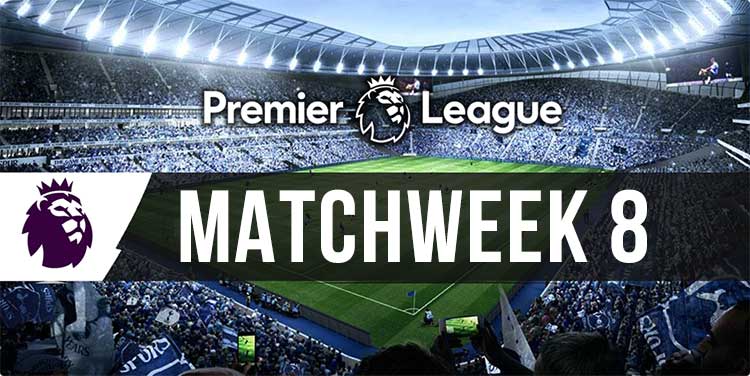 THE second international break of the Premier League season is over and the star players are back from representing their countries and ready to play a role for their club going forward.

After what looked like a tear away Manchester title train a month ago, finally there is a cat amongst the pigeons and the team at SafeBookies.com could not be happier.

Manchester City suffered its first loss of the season away to Tottenham and Manchester United again failed to impress against Stoke.

The Sky Blues’ loss to the Spurs did nothing to dampen Sportsbet.com.au’s opinion of Pep Guardiola’s men, who remain odds-on at $1.91 to win the 2016/17 title.

Another huge weekend of football looms and we again have put together a massive multi that is going to line our readers’ pockets.

All odds for the eighth week of the Premier League season were provided by Sportsbet.com.au.

Selections for the week 8 EPL multi:

Both teams will be looking to string together a run of wins after average months in England’s top flight.

Chelsea registered a comfortable 2-0 away win against Hull two weeks ago, but prior to that they had just one point from their last three matches, including a humiliating 3-0 loss to fellow glamour London club Arsenal.

Leicester is yet to hit top gear in 2016, and after only scoring one goal in their last two outings, the Foxes will need to lift in the front third if they are to trouble the Blues at Stamford Bridge.

Chelsea legend Zola believes his old side will “make a statement” in the next fortnight of football against Leicester and Manchester United and it starts this weekend.

We are backing the Blues to make it two wins in a row at the expense of Claudio Ranieri’s Foxes.

The feature game of the week sees the Sky Blues of Manchester hosting the Toffees from Everton in a match that should define the visitors’ season to date.

Everton currently occupy fifth spot in the Premier League but the ladder-leading City will be just the second team this season that the Toffees have faced that are in the top half of table.

Manchester City suffered their first dropped points in a surprise 2-0 loss to Tottenham last week, but their side should be strengthened by the return of superstar midfielder Kevin De Bryune, whose hamstring has recovered faster than expected.

Everton might be in fifth position on the table but it is not a spot they will inhabit for long.

Manchester City should win very comfortably here and solidify their position at the top of the tree.

Third leg of our multi is the matchup between the heavy artillery of Arsenal and the relegation embattled Swansea in the English capital.

The Swans have been abysmal over the last six weeks, picking up just one point in five attempts.

The poor run of form has prompted Swansea owners to install new manager Bob Bradley to the helm, but the American gets a baptism of fire this weekend as his side comes up against one of the in-form teams of the Premier League.

Arsenal has not dropped a single point since August 21 and is averaging two goals a game from their last five matches.

It is hard to see how Swansea mounts a challenge here and we are happy to take the skinny odds – Arsenal should win this one without having to get out of second gear.

An interesting match between Crystal Palace and West Ham closes out our multi this weekend.
West Ham has been ordinary this season after narrowly missing out on a Champions League spot last campaign.

The Hammers have just four points to their name after seven weeks of football. To make matters worse two of their last three losses were to sides expected to be relegated this season.

After a shaky start to the season the Eagles of Crystal Palace are flying.

The Eagles picked up just one point from their opening three matches but have since gone on to win three of the next four, which happened to coincide with the acquisition of Belgian striker Christian Benteke.

Since joining Crystal Palace at the end of August the former Liverpool marksman has been on fire, scoring in three of the four appearances he has made for the club.

Benteke is currently at $41 to be the top goal scorer at the end of 2016/17 season at Sportsbet.com.au, but those odds will shorten significantly if his scoring run continues.

The Hammers have been horrible and the Eagles have been enormous over the last month, and we know from experience that it is silly to flirt with form.

We are in Crystal Palace’s corner for this one, we are banking on the Eagles to bring our multi home in style.

The international break is over and all the top flight competitions are back in full swing which means punters are spoiled for choice this weekend in terms of promotions on all the football betting markets.

Crownbet.com.au is running a multi insurance promotion this weekend which encompasses all the big soccer leagues around the world.

Looking towards the head-to-head market this weekend in the Premier League? Head over to WilliamHill.com.au.