2015 Ashes series lowdown – where can the value bets be found? 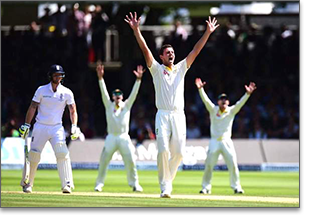 TWO tests in and with the series locked at one test apiece, this year’s Ashes series looms as one of the most exciting duels between the two nations in almost a decade.

England jumped out of the blocks in Cardiff, shocking the Australians with a resounding 169-run victory that caught almost everyone off-guard and gave the home side real belief that the urn could be returning back to the UK.

The Australians were hungry to atone for their poor showing in Wales, and bounced back in sensational fashion, dismantling the English to the tune of 406 runs at the home of cricket – Lord’s.

With everything to play for in the third test at Edgbaston, let’s take a look at who the strong performers were and where we can find some value for the remainder of the series.

If you’re placing a bet on the remaining three matches of the Ashes, sign up with www.CrownBet.com.au – use up to $650 in bonus bets!

Without question the number one batsman of the series so far has been Austalia’s Steve Smith, who answered all his critics with a magnificent double century in the first innings at Lord’s.

While Smith is the obvious candidate for most runs in the series, the $1.66 on offer from Bet365 is dangerously low given how fickle the game of cricket can be.

If you look elsewhere there is plenty of value to be found, and that value is with Chris Rogers.

The Aussie opener was only just shaded by Smith in the opening innings, scoring 173.

Couple this with Rogers’ first innings score at Cardiff of 95. his overall runs total of 327 which places the Aussie opener just shy of Steve Smith’s overall runs scored mark by 12.

While questions linger over Rogers’ health going into the third test after retiring ill from the second innings at Lord’s, scans have cleared the 37-year-old of any serious damage and should be cleared to play at Edgbaston.

The $3.75 on offer from Bet365 for Rogers to end the series with the most runs scored is an astute bet given the form he is in.

For the English, Joe Root is the overwhelming favourite to end the series with the most runs for the home side, quoted at just $1.53 with Bet365.

While Root’s form in the opening test was stellar, scoring a combined total of 194, he only managed a paltry 18 combined runs in both innings in the second test at Lord’s.

England captain Alastair Cook struggled to get into the match at Cardiff, but he was the stand out with the bat at Lord’s for the three-lions, falling just shy of a century at the home of cricket.

Cook is one of England’s all-time great batsmen, and will use the 96 runs scored at Lord’s in the first innings as the impetus to kick on and lead from the front with the bat for his side.

The $5.25 on offer from Crownbet looks to be great value given the England captain’s Lord’s form.

The top wicket taker market is one the punters should be looking at if they want to make their bet count, given there has been no clear stand out for either side so far in the series.

For the English Moeen Ali has given the Australians some serious trouble on the turning wicket, and looks to be one of the keys with the ball for England going forward in the series.

Ali is the only English bowler to take wickets in every innings so far in the series, and represents terrific value at $4.00 with Crownbet to be the leading wicket taker for the home team in the series.

Australia have had no real standout with the ball so far this series, with all of Mitchell Starc, Mitchell Johnson, Josh Hazlewood and Nathan Lyon each taking turns in amassing the wickets.

What was ominous for the English though was the strong form of Mitchell Johnson in the second innings at Lord’s.

The left-armed quick was back to his venomous best, taking six wickets for the match, but it was his second innings performance that would have put the English right back on edge.

Johnson regained the vigour that saw him secure 37 wickets the last time the teams met in an Ashes series, with his searing pace, compounded with his aggressive style striking fear into the English.

If Johnson is able to maintain this form, the $4.50 quote from bet365 to be the overall leading wicket taker in the Ashes series looks like a smart investment.