What are the bookies thinking ahead of the 3rd Ashes test? 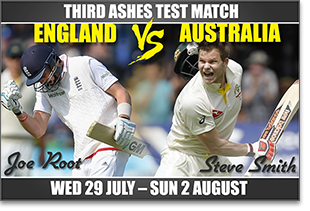 WITH the series locked at one win apiece, you could be forgiven for thinking the home side would be favoured with the online bookmakers to take out the series.

Not so in this Ashes series.

After the Aussies thumped England to the tune of 405 runs at the home of cricket, the odds have swung dramatically in the favour of the visitors.

Even though the teams have split the opening two tests, punters are favouring Michael Clarke and his men to score the series win.

Australia’s crushing win swung the odds significantly in their favour to take out the series, with the visitors being crunched in to $1.42 with William Hill to win the Ashes series in England for the first time in well over a decade.

The regain/retain Ashes betting also weighs heavily in the visitors’ favour, with the Aussies the $1.16 favourites to retain the urn – bearing in mind a series draw means the Aussies hold on to the Ashes.

England are $5 outsiders to regain the Ashes.

Even though the series is split 1-1, the emphatic nature of Australia’s 405-run win has given punters reason to believe the Australians will go on to win at Edgbaston.

Sportsbet has the Australians at $1.80 favourites to take out the third test, with England complete outsiders at $4.60.

With mostly fine conditions reported for the week in Birmingham, the game is unlikely to be interrupted by rain, but the draw is still a favoured option ahead of England winning the test at $3.50.

England has made one change to the team that was trounced at Lord’s with Jonny Bairstow coming in for Gary Ballance.

Bairstow has been rewarded for his prolific form at county-level, where he averaged over 100 with the bat over the course of this season.

Cricket fans have not seen Bairstow on the international stage since the beginning of 2014 in the fifth Ashes test in Sydney where Australia clinched the series 5-0.

Baristow’s inclusion in the side has led to a reshuffling of the England batting order, with national selector James Whitaker announcing their intentions prior to the Edgbaston test.

Ian Bell will move up the order to bat at three followed, by Joe Root at four and Jonny Bairstow coming in at five.” Whitaker said.

Australia is unlikely to make any changes to the team that dismantled England in the second test.

Chris Rogers, who left the field in the second innings after experiencing dizzy spells and signs of vertigo at Lord’s is likely to keep his spot in the team after passing a vigorous training session behind closed doors.

Rogers will still be given right up until the toss to prove his fitness, with Shaun Marsh, brother of the current test all-rounder Mitch likely to be his replacement if Rogers is unable to take to the field.

Shaun Marsh was in terrific form with the bat, opening for Australia in their tour match against Derbyshire last week, scoring a century in the first innings.

Brad Haddin returned to the squad following his family issue, but is unlikely to come into the 11 after Peter Nevill’s stellar debut with the gloves.

Luckless all-rounder Shane Watson still harbours hopes of regaining his spot in the team, but after Mitch Marsh’s performance with both bat and ball at Lord’s, seemingly only injury would grant Watson his wish.

After the first test in Cardiff, the odds dramatically changed after England’s impressive victory.

Online bookmaker Sportsbet spilt the two sides down the middle, with $5 offered for either side to get the overall test series win, with the draw being the favoured outcome at $1.50.

That all changed after the Aussie’s cruised to a 405 run victory at Lord’s.

Steve Smith firms for man-of-the-series and most runs

After his masterful display with the bat, Aussie first drop Steve Smith has been installed as the favourite to take out the man-of-the-series, with Sportsbet offering $2.25 on the world’s number one ranked batsman to continue his stellar Ashes form.

The double century Smith scored in the first innings at Lord’s has done his series top run scorer chances no harm either, with Crownbet placing the Aussie number three at $1.57

England’s great white hope Joe Root slid down the market after his poor showing at Lord’s.

Root, who was the leader of the top run scorer market following his majestic Cardiff performance has since slipped to the fourth line of betting as is currently paying $6.50 with Sportsbet to register the most runs between the teams.

After a stellar world cup with the white ball, 25 year old Mitchell Starc is finally delivering on his promise in the longer form of the game.

The left-armed quick from Western Australia took seven wickets in the opening test in Cardiff but struggled to have a real impact in the wicket taking column at Lord’s – with only two scalps at the home of cricket.

Starc is currently the $4 favourite with William Hill to take the most wickets in this Ashes series.

Mitchell Johnson’s venomous second innings spell at Lord’s propelled the left-arm quick back into top wicket taker consideration, with the fiery Aussie a $5 outsider to claim the most scalps.

The leaders of sports betting in Australia are back with an Ashes special you do not want to miss.

Sportsbet has a money back special on the top team A or top team B run scorer market.

If you place a first innings bet on a specific player and he scores 50 runs but fails to be the top run scorer you get cash back, up to $50.