Deprecated: Redux::setHelpSidebar is deprecated since version Redux 4.3! Use Redux::set_help_sidebar( $opt_name, $content ) instead. in /home/safebookies/public_html/wp-includes/functions.php on line 5323
 Clinton surges ahead in polls, but punters still going for Trump 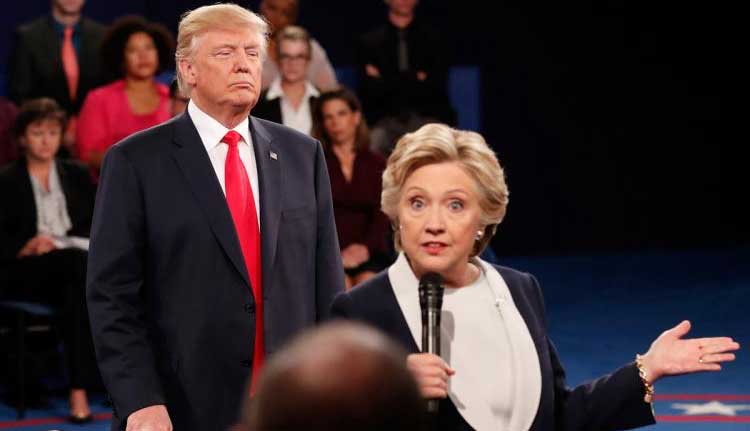 WHAT on Earth is wrong with punters?

In a week that was among the worst of a sad lot from US presidential candidate Donald Trump, for some reason, Sportsbet.com.au punters have actually backed him in to win the election.

It’s clear that Aussie punters must think that Americans are narcissists if they believe they are willing to elect such a disgusting human to their top position of office.

During the second debate between the Republicans’ controversial pick and his Democrats opponent Hillary Clinton yesterday, Sportsbet.com.au spokesman Ben Bulmer reports that Trump actually shortened his odds, thanks to to a flood of money.

“Trump may have threatened to send his rival to jail, disowned his running mate Mike Pence and confirmed he doesn’t pay taxes, but punters don’t seem to care, staking more on the billionaire to win the election than Hillary during the course of the debate,” Bulmer said.

“Trump’s odds have improved following the second debate, but he is still starting from a long way back and will need a miracle to overcome Hillary who remains the odds-on favourite to be the next US President.”

Bulmer said Trump started the debate priced at $4.50 to win the election, but quickly drifted out to $5 after a slow start.

But he was quickly crunched back in to his original quote and by the end he was down to $4.20.

However as the debate went on support for Clinton dried up, with her odds winding out to $1.28.

“Punters remain split on who will win the election, with Clinton attracting just $70,000 more in bets than Trump, but more than twice as many punters are backing Trump.”

Trump, at times during the debate, trod upon dangerous ground, at one point threatening to jail Clinton if he wins power.

“If I win, I am going to instruct my attorney general to get a special prosecutor to look into your situation because there has never been so many lies, so much deception,” Trump told Clinton.

“We’re going to have a special prosecutor.”

Trump was referring to Clinton’s use of a private email server, with allegations she mishandled classified information. She was found by the FBI have been “extremely careless” with the information, but also that there was “no intentional misconduct” in her actions.

“It’s just awfully good that someone with the temperament of Donald Trump is not in charge of the law in our country,” Clinton replied.

“Because you’d be in jail,” Trump bit back.

How anyone could be endeared to his snide, sniffling, glowering performance is beyond us, but they must be striking a chord with someone because he is still managing to make moves in the opinion polls.

If you like an attack dog who has absolutely no policies, then Trump is the man.

Clinton might be the better of a bad bunch, but at least she has an idea about health, foreign policy and other things that actually matter.

We kid you not, one of Trump’s ones on health was that he had “plans that are so good, because we’re going to have so much competition”. But how, Donald?

Then he was going to cut tax “big league”, while he just knew Clinton was going to raise them. But how, Donald?

On top of that, the secret recordings of Trump’s disgusting talk of women as objects should really be his death knell.

The recordings, released last week, feature Trump speaking about he he can “grab them by the p***y”.

“You know I’m automatically attracted to beautiful — I just start kissing them. It’s like a magnet. Just kiss. I don’t even wait.”

We kid you not.

In the video, Trump is recorded talking about an unnamed woman to Billy Bush, who was a host for Access Hollywood, a TV entertainment show.

“I moved on her and I failed. I’ll admit it,” Trump says.

“And I moved on her very heavily.

“In fact, I took her out furniture shopping.

“She wanted to get some furniture. I said, ‘I’ll show you where they have some nice furniture.

“And she was married.“

He said it, then passed it off as “locker room banter”.

We don’t know which locker room he’s been in, but we’ve never heard disgusting talk like that.

He has addressed the tape, saying that his words were “foolish” and, during the debate, said that no one respects women more than he, which drew plenty of laughs.

“I’ve never said I’m a perfect person, nor pretended to be someone that I’m not,” Trump said.

“I’ve said and done things I regret, and the words released today on this more than a decade-old video are one of them.

“Anyone who knows me knows these words don’t reflect who I am.”

He then used it as a way to attack the Clinton campaign, bringing Hillary’s notorious husband Bill into the situation.

“Bill Clinton has said far worse to me on the golf course — not even close,” Trump said.

“I apologise if anyone was offended.”

The third and final presidential debate will be held on Thursday, 20, at noon, AEDT, and Clinton is, again, the heavy favourite to take yet another win.

She is priced at $1.40 to secure another debate win, while Trump starts as the $2.75 outsider.