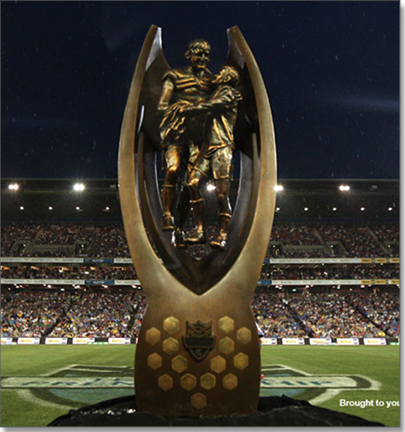 THIS week NRL stars have been busier than a one armed brick layer in Baghdad – mostly getting themselves in trouble.

We’re going to have a look at what NRL players have been up to, who’s in trouble and who is looking good ahead of September.

Johnnie Cochran of the NRL?

Gold Coast Titans forward Ryan James looked set to spend some time on the sideline after he broke West’s Tigers’ fullback, James Tedesco’s jaw last week. No one could argue James didn’t hit Tedesco as high as a kite and break his jaw. It was televised. We all saw it. And Tedesco’s jaw is now held together with chewing gum and gaffer tape.

But in one of the most surprising moves of the NRL season, James decided to challenge his grade two careless high tackle charge and marched off to the NRL judiciary, arm in arm with his lawyer, Jim Hall.

I’m saying Ryan James was still found guilty of a careless high tackle which broke James Tedesco’s jaw, but wasn’t handed a suspension at all: that’s right, not even five minutes on the side line for breaking another person’s jaw. Trying doing that in front of a night club on a Friday night and see what happens.

Now that is some fine lawyering. Sure, Johnnie Cochran got O.J. Simpson acquitted of murder, but there wasn’t footage showing Simpson knifing Nicole Brown and Ron Goldman to ribbons. And James Tedesco is still swanning around with a broken jaw. Not even Johnnie Cochran could argue to get O.J. to serve no suspension if he had broken Tedesco’s jaw.

Jim Hall now shapes as the patron lawyer saint of guilty as sin NRL players. Perhaps James Roberts, Sam Kasiano and Paul Gallen should have him on retainer….

In the dying minutes of the Broncos 20-10 win over the Canterbury Bulldogs on Thursday, monstrous Bulldog prop Sam Kasiano kicked retiring stalwart Corey Parker in the face, the result left Parker with a mug that looked like a box full of melted lego.

Kasiano has since tried to sell the heart of gold routine and claimed it was a complete accident and that his foot slipped wildly and unexpectedly into the mouth of the guy holding his other leg in a tackle. How could he know that kicking out at someone would hurt them?

Once play was eventually pulled to a halt and the extent of Parker wearing Kasiano’s boot as a hockey mask came to light the Broncos were furious and clobbered a pathetic gang of Bulldogs into next week.

Kasiano has been hit with a grade two dangerous contact charge and could miss as much as three weeks. Corey Parker will still have a face that looks as though someone put out a fire with a pitch fork though. Let’s hope Kasiano can get a hold of Jim Hill ahead of his trip to the judiciary.

WilliamHill.com.au has Canterbury at $9 to win the 2016 Grand Final.

James Roberts in all sorts

In this golden age of player misconduct that includes, but is not exclusive to, players performing or simulating sex acts with dogs, glassing their partner, molesting strangers in a club, rampant drug use – either performance enhancing or recreational, pouring liquor on women during sex acts and consorting with known criminals, it is hard to imagine hardened NRL fans having their nose bent out of shape by a player simply getting up to some hijinx while drunk…. on alcohol.

Reports have emerged this week that Broncos’ bad boy James Roberts yelled at a barmaid at The Normanby Hotel, was put in a choke hold by security, ejected from the venue, regained consciousness and moved on to another venue to keep drinking. There are also allegations that the week before at the GPO he spat in a club manager’s face.

I don’t see what all the fuss is about!

Anyone who know me can attest to the fact what James got up to at The Normanby could be considered a pretty standard Tuesday night for me….

Sure spitting at people is poor form, but in comparison to defiling a puppy or glassing your missus, it doesn’t really compare!

After their win this week over the Bulldogs, CrownBet.com.au now has the Broncos at $7 to win the 2016 Grand Final.