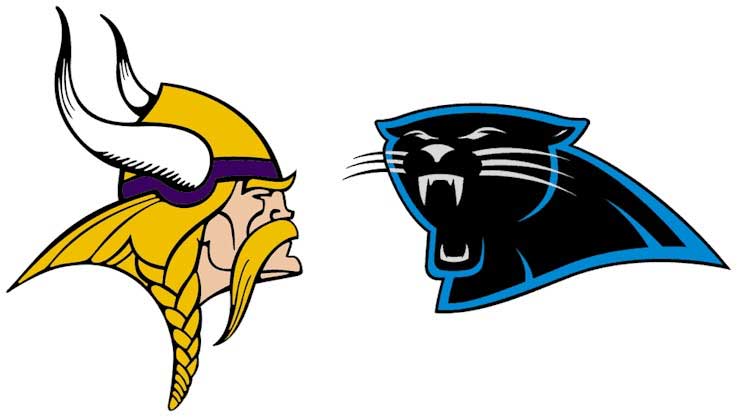 THE undefeated Minnesota Vikings travel to Charlotte to take on Cam Newton and the Carolina Panthers in our game of the week.

The Vikings have been sensational to start the season and find themselves 2-0, despite coming up against strong opposition and losing two of their absolute best players.

Quarterback Teddy Bridgewater went down prior to the commencement of the season after rupturing his ACL, while superstar running back Adrian Peterson injured his knee during last week’s narrow victory over bitter rivals the Green Bay Packers.

Peterson had surgery to repair the injury during the week and will be out for at least 2-3 months.

Despite the injury concerns, newly acquired quarterback Sam Bradford had a career-best outing in his Viking debut, completing 22 of 31 passes for 286 yards and two touchdowns.

Bradford attributed his ability to hit the ground running to the quality of his teammates.

“The guys here have been awesome,” Bradford said in his post-game press conference.

“Any time you join a new locker room, it’s not easy at first. But these guys have had my back since Day 1.

“(Backup quarterback) Shaun Hill has been right there with me the last two weeks, every step of the way. He was with me with a previous team, so he can relate things (about this offence) back to what we did in the past. All the guys have been great, and I just wanted to come out and play well for them.”

The Carolina Panthers are extremely unlucky not to be undefeated to start the season.

Had Graham Gano’s last-gasp kick not sailed wide against the Broncos in week one the Panthers would be talked about as the team to beat this season, but even after crushing the 49ers the week after Sportsbet.com.au still has Carolina as $10 Super Bowl chances.

Carolina MVP quarterback Cam Newton is again driving his team’s offense, and Vikings’ coach Mike Zimmer said the former number one draft pick has taken his game to the next level.

“Since the last time we played him he’s so much improved: The command of the offense, he doesn’t get rattled under pressure, he scrambles to find the seams in the defense,” Zimmer said.

“I think obviously these receivers help him quite a bit. They do a good job in the run game and in the protection. (But) I was telling someone last night the maturation in (Newton) is like night-and-day from then to now.”

Zimmer said his defence will have its hands full on Sunday night quelling the influence of Newton, but said it would be foolish to focus on just one component of last year’s best offense.
“It makes Tuesdays bad days around here because they have so many weapons.”

“(Greg) Olsen is a tremendous tight end. He may be the best,”

“I’m impressed with the offensive line – how they handle pressures and protections. I think they’re coached very well.”

The Carolina Panthers have been dynamic to start the season, and had their kicker not bungled a relatively easy kick in the Denver altitude in week one, we could be looking at an outright Super Bowl favourite.

The big question is: can the Vikings cover for Adrian Peterson?

We have already seen that Sam Bradford can play his part in the purple, but replacing a perennial all-star like Peterson is much harder to do.

The Vikings signed Ronny Hillman to their roster (a member of last year’s Super Bowl champion winners the Denver Broncos) but it remains to be seen if he can fill the void.

The Panthers are one of the teams to beat this season, and while the Vikings’ start to this campaign has been impressive, we are far from convinced they are true playoff threats, let alone Super Bowl contenders.

We believe the Panthers will record an easy victory here to take their record to 2-1.

Match prediction: Carolina Panthers to cover the -7 line ($1.92 at Sportsbet.com.au)